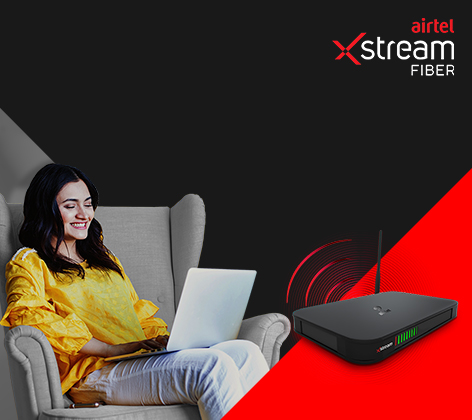 How to buy a new broadband connection?

How long does it take for new broadband connection to become active?

How much to pay for the broadband router?

It will be provided free of cost irrespective of any Airtel broadband plan you may choose.

Should I choose broadband Internet or stick to dongle?

Broadband Internet will give you a better overall experience than a dongle. Dongles are normally portable Internet connections that you plug directly into your laptop or desktop computer. Meanwhile, broadband Internet connections are provided for multiple devices and are laid out over copper or fiber optic cables. I suggest you take up Airtel broadband for your home, because you will get a really good deal on the plan.

Will I get the maximum broadband speed promised in the plan?

The speed of internet shall vary as per your exact location. It will be confirmed before installation process.

Will I receive landline/telephone/handset/receiver with the broadband router?

While you shall receive unlimited Local and STD calls, the landline/telephone/handset/receiver instrument will not be provided from our end.

How is broadband different from WiFi?

Wifi is a technology that uses a router to create a Wireless Local Area Network (WLAN) to connect devices such as computers, tablets and smartphones with one another. This technology uses radio waves and does not require an Internet connection. Broadband is the technology that connects a home computer or network to the Internet using cables, satellite or mobile connection.

Why is Airtel broadband best for home?

The Airtel Broadband employs the most modern broadband technology called Airtel Xstream Fiber with the fiber optic connectivity with speed up to 1 Gbps. The Airtel broadband connections also come with their own free router, unlimited STD and local calls and unlocks rewards such as subscription to Airtel Xstream app and Amazon Prime.

Do you need broadband to have WiFi?

You can have a wifi network without the broadband, however without the internet connectivity the wifi will have some very limited features. You can use it to interact with other devices at home and use it for things like offline file transfer, streaming media to other devices, and controlling your computer remotely.

Which is better WiFi or Broadband?

While both wifi and broadband have their own benefits, the broadband is a better choice for majority of the users since it provides faster speeds. The broadband connection is also less susceptible to being hacked since it is more secure.

How to check Airtel broadband usage?

You can check the Airtel Broadband usage through the Airtel Thanks app. Once you have logged into your account using the registered mobile number and DTH, you will get the various accounts including the Fixed Line Broadband. Your usage of broadband will be displayed there as well as your outstanding bills.

How can I get Airtel broadband connection?

You can buy the Airtel Broadband connection in just three easy steps. First you need to open the Airtel broadband page on your computer or smart device, choose your city and the broadband plan that you wish to opt for. You will be directed to a different page where you need to provide your details and you will receive a call from the installation team regarding your convenient installation time and location.

All the Airtel Broadband connections come with the free wifi router and therefore the customers can use it wirelessly.

How to change my existing Airtel broadband plan?

You can log into the Airtel Thanks app and choose the Fixed Line Broadband account. There you will be provided the option to manage your connection and taken to the page where you can change your plan.

How is Airtel Xstream Fiber better than the regular broadband connection?

The Airtel Xstream Fiber promises higher speed and more stable connection due to the Fiber Optic technology used by Airtel in comparison to the traditional cables. The router is also better with Gigabit ports to accommodate the Airtel internet speeds that go up to 1 Gbps.